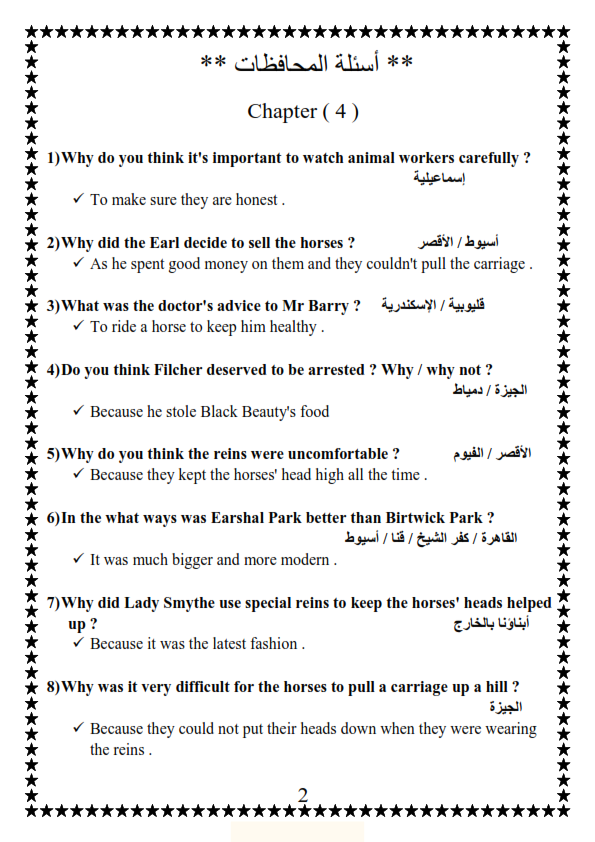 1- In what ways was Earlshall Park better than Birtwick Park?
It was bigger and more modern.
2- Why did Lady Smythe use special reins to keep the horses’ heads held high?
Because it was the latest fashion
3- Why was it very difficult for the horses to pull the carriage up a hill?
Because they could not put their heads down when they were wearing the reins.
4-  Do you think that Ginger was right to start to kick? Why / Why not?
Suggested: Yes, because she was very uncomfortable./No. She should have worked hard like Black Beauty.
5-  How do we know that York cared about Ginger and Black Beauty?
We know that York cared about them because he was angry that they wore the special reins. He helped them when they were hurt.
6- What was the problem with the reins that Lady Smythe wanted the horses to wear?
They were very uncomfortable and it was difficult to pull a carriage up a hill with them on.
7-  How did Ginger and Beauty become hurt?
They fell to the ground and had to be cut from the carriage.
8- Do you think that Beauty was angry with Ginger because he was hurt? Why? / Why not?
Suggested: No because he realised that Ginger only did this because the reins were uncomfortable
9- What did Filcher do with Black Beauty’s food?
He took it home to give to his rabbits.
10- Why do you think that Earl Smythe said that he might not get much money for Ginger?
Because Ginger’s knees were badly damaged. She also does not always do what her owners want.
11- What happened to Black Beauty’s food?
Filcher gave it to his animals.
12- Why did Mr Barry sell Black Beauty?
He felt bad after Black Beauty did not have
enough to eat and after the police arrested
Filcher.
13- Why is it important to look after working animals carefully?
Because they work much better when they are
given good food and are looked after well.
14- What happened to Black Beauty and Ginger after Ginger began to kick?
They fell to the ground and had to be cut from the carriage.
15- Why did the Earl decide to sell the horses?
Because they could not pull a carriage any more.


16- Do you think that Black Beauty was angry with Ginger after the accident? Why?/ Why not?
Suggested: No. Although the accident damaged his knees, it meant he did not have to pull the carriage with the reins. He understood why she did this and was still friends with Ginger.
17- Why did Mr Barry’s doctor advise him to ride a horse?
Mr Barry was a businessman who had little exercise. The doctor advised him ride a horse to keep him healthy.
18- Do you think Filcher deserved to be arrested? Why?
He wanted to give it to his rabbits so that he could get more money for them at the market. He was not a good man and only thought about himself and his family, not about Black Beauty.
19- What did Black Beauty find difficult about his first few days in London?
There was a lot of noise and a lot of people and it was difficult for him to find his way between the carriages.
20- Why did Black Beauty think that Jerry was the best owner he had had?
Because he gave Black Beauty good food and fresh water, he was kind to him and he was a good driver.
21- Why did Black Beauty feel sorry for some of the taxi drivers and their horses?
Because they had to work for very long hours to get enough money.
22- Why do you think that each of Ginger’s owners paid less money for her?
Because she was becoming weaker and weaker, so she could not work very well.
23- Do you think that people were always happy to have Jerry as a taxi driver? Why? / Why
He was probably not popular with everyone, because he did not always do what people asked him to do.
24- How do we know that Jerry cares about horses?
He does not take the passengers quickly to the station because he always thinks about his horse. He does not want his horses to be tired.
25- What did Harry and Dolly do to help look after Black Beauty?
Harry always helped to look after him and Dolly came to see him often.
26- What did Black Beauty find difficult about living in London?
He thought that there was a lot of noise and a lot of people and that it was difficult to find his way between all the other carriages.


27- How easy do you think it was for people to travel around London at this time?
Suggested answer: It was probably quite difficult because there were no cars, trains or buses. Only wealthy people could take a taxi or carriage because they were probably expensive.
28- Why didn’t Jerry go fast for the passengers who wanted to catch a train?
Suggested answer: He did not want Black Beauty to be tired, because then he could not do a good job later in the day.
29- How did Jerry describe Black Beauty to his daughter?
He said that he was as gentle as she was.
30- Why did Black Beauty stop finding it difficult to pull a taxi in London?
Because he began to trust Jerry.
31- Why do you think that Jerry took Captain to work on Black Beauty’s first morning in London?
I think he did not want Black Beauty to have a difficult first day.
32- Why did Ginger stop kicking people who weren’t good to her?
Because she was not strong enough to kick any more.
33- How do we know that Jerry was a kind man?
We know that Jerry is kind because he took the woman to hospital when he saw that she needed help.
34- Why do you think that one of the taxi drivers says this to Jerry when he sees Black Beauty for the first time?
He can see that Black Beauty is a strong, healthy horse. Perhaps he thinks that he is too good to do hard, difficult work.
35- Why did Black Beauty feel sorry for some of the taxi drivers and their horses?
Because some taxi drivers and their horses have to work very long hours without a rest to get enough money. Some of them had to work for seven days a week.
36- Why do you think that Skinner makes Black Beauty work so hard?
He was very poor and had to work hard to get enough money to live. He probably did not think that the health of his horse was important.
37- At the station, do you think that Skinner knew that Black Beauty was too weak to carry the family and their bags? Why? / Why not?
I think that he knew, although he told the girl that Black Beauty was OK. However, he needed to take the family to get more money.


38- Why do you think that the rich man did not apologise to Jerry when he had to wait for him in the cold?
The rich man probably thought that it was Jerry’s job to wait for him. He did not think that this might be difficult for Jerry and Black Beauty.
39- Do you think that the man should pay Jerry for the time he waited outside the house? Why? / Why not?
Yes, he should pay him. If Jerry did not wait, he could take other passengers to places and get more money.
40-  Why wasn’t Black Beauty put into a carriage for two days?
Because Jerry was too ill to take him out for work.
41- Why did a vet look at Black Beauty?
A vet looked at Black Beauty after he fell down on the street. He saw that Black Beauty needed food and rest.
42- Why were holidays not always an easy time for taxi drivers?
Because they had a lot of work taking people from house to house.
43- What happened to Jerry when he had to wait outside the house of a rich man?
He became ill because it was very cold.
44- Why did Polly write to Mrs Fowler?
Jerry could not drive taxis any more, so Polly wanted to find work for him.
45- Why do you think that Skinner told the girl not to worry after she said that Black Beauty looked too weak to carry their bags?
I think Skinner told the girl not to worry because he didn't want to lose money. He had to work for seven days a week to get enough money, even when his horses were weak or ill.
46- Why do you think that Black Beauty was sold at the part of the market where the horses were old or ill-looking?
Because Black Beauty had been ill and now he looked old. 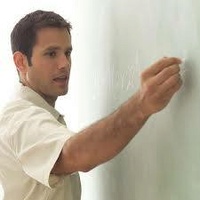